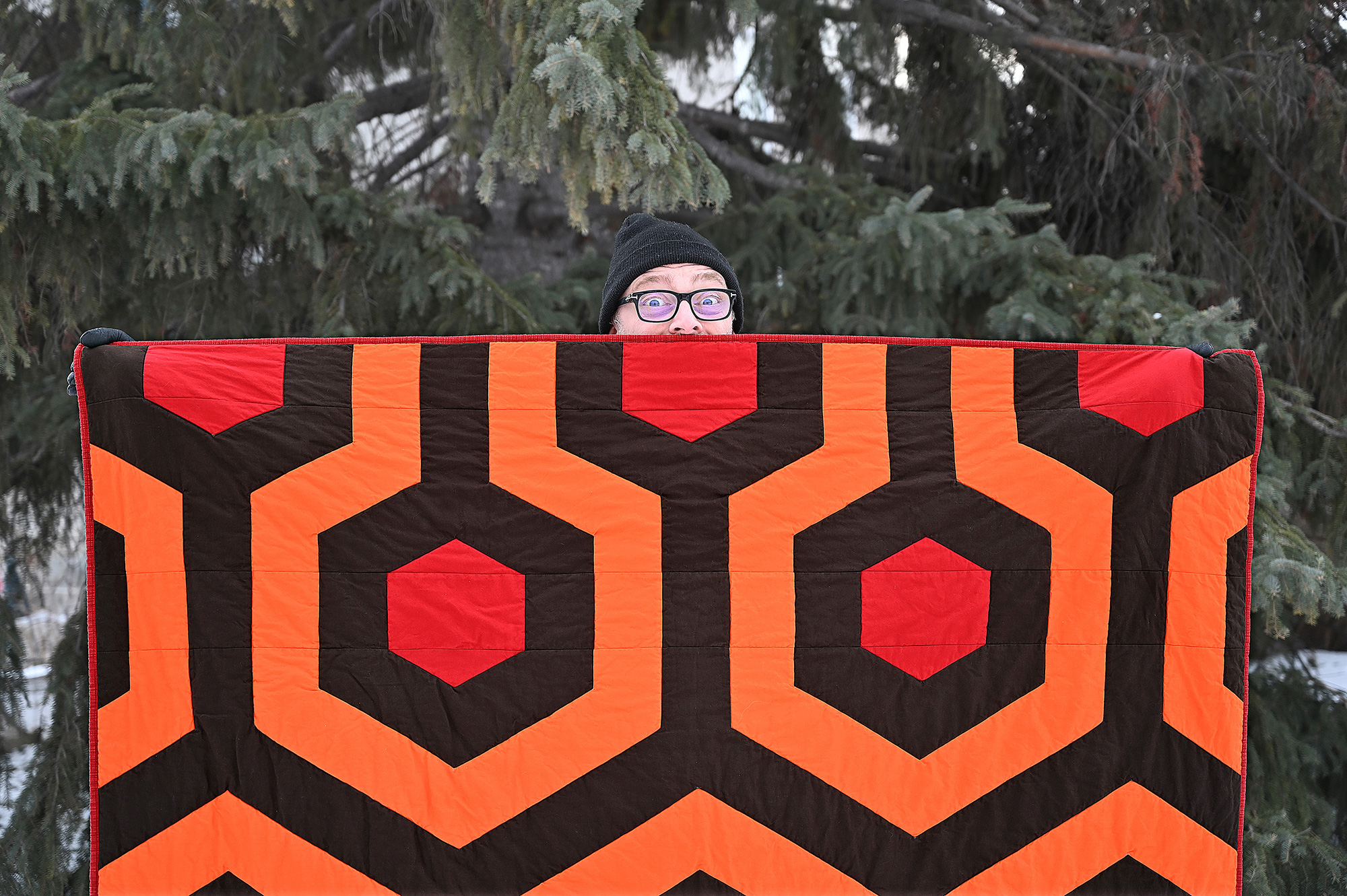 Posted at 21:17h in Pattern, Quilt by admin_holly 0 Comments
0 Likes
Click here to buy the pattern

Note: Some of the method shown in this blog post is different from what is in the pattern.

Last year while in Nashville for QuiltCon I purchased a print for my husband that depicted the unique carpet pattern from the Stanley Kubrick movie The Shining. ⁣It’s one of his favourite movies and I’ve always been fascinated by the carpet design myself. I looked at that print every day and eventually it occurred to me that it would make a fun quilt. My husband was all in on that and excited for me to make him a Shining quilt. ⁣

The Shining Danny Tricycle from ky trickett on Vimeo.

For my fabric pull, I selected Riley Blake Designs Confetti Cottons in Barn Red, Riley Orange, and Brownie. If you’ve never worked with Confetti Cottons, do yourself a favour and look into getting some, STAT! This was the first time I’ve worked with it and the first thing I did when I received my order was pet it and “oohed and ahhhhed” out loud. It is soooo soft, almost like a brushed cotton. Seriously, it has a beautiful hand and the colours were exactly what I saw pictured on the Riley Blake site, phew!

I assumed that because the Overlook Hotel carpet design is based on hexagons that it would be super-easy to make a pattern for it. But as soon as I got started on my pattern in Illustrator, I realized that the intricacy of the design would be a challenge to recreate with “typical” quilt shapes. ⁣
⁣
Over the past year I took a stab at it a number of times, trying to come up with an “easy” solution. Eventually I came to the conclusion there was no easy solution. Meanwhile, my husband was anxiously (but patiently) waiting for his quilt. At one point I told him it probably wasn’t going to happen. He was so disheartened that I decided there MUST be a way. There’s always a way. It is just not always easy. ⁣
⁣
More determined than ever, I decided that to make it happen, I needed to stop trying to do it with a traditional method. I broke the shapes down into rows and talked myself into figuring out how to do inset seams. ⁣
⁣
Et violà, I came up with a row-based pattern and the inset seams (or “V‑seams” as I’ve dubbed them) are not as tricky as I thought they’d be once I got the hang of it. ⁣Nothing ever is.

I started on the “short” rows first (above) because I was a little nervous about screwing up. With a bit of practice, I got the hang of the inset seams and they turned out pretty smooth. Next I moved on to the “tall” rows (below, feet shown for scale). See the brown piece in the middle? It’s all 👏 one 👏 piece 👏! I was super-nervous to sew that all-bias edge monster. ⁣⁣

Progress made and my first rows are shown up on my design wall, below. It’s starting to look like a quilt — or carpet as the case may be — and I’m starting to get excited.⁣

For the in-betweener joiner bits I decided the only way to achieve precision piecing of each colour would be to paper piece them as strips and trim them down to the correct height afterwards. It worked like a charm although the 6’ strip of paper/fabric was a little awkward to maneuver. I came up with a system where I’d roll up the ends and clip them with a Wonder Clip so that they were much easier to move around.⁣

In my excitement over finishing my quilt top I completely forgot to take an all-done photo. Here are some close-ups of my pin basted quilt sammich, instead.

I decided to stitch-in-the-ditch quilt it because 1) I don’t want the quilting to interfere with the graphic nature of the design, and, 2) I am pretty sure I wouldn’t be able to do the cool Overlook Hotel-themed quilting ideas that I had in my head on my little domestic machine. 😭⁣

My husband LOVES his new quilt!

*Note: Some of the method shown in this blog post is different from what is in the pattern.

Sorry, the comment form is closed at this time.

My Dresden Swirl quilt is finished and I couldn’

Behind every great “quilt in the wild” photo i

Straight line quilting FTW! I was able to get the

This spring I discovered the joy of spray basting.

As a little gift to myself I made my binding befor

I think I would enjoy the process of sewing on sas

Part 2 of my interview with Amanda of @notyourgran

Are you team thimble or team nimble? I’ve never

All the Dresden Swirl blocks! I’m in love. 🥰